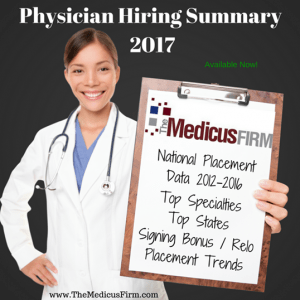 Article submitted by Jenni Trebon, to share a health insurance update. If you’d like to submit an article, email Kelly Sawyer at cflmgma@gmail.com.

The Medicus Firm’s annual hiring summary, based on hundreds of physician placements nationwide throughout 2016, reveals a number of key physician recruiting and hiring trends.

Members of Central Florida chapter of the MGMA may email Jenni Trebon jtrebon@TheMedicusFirm.com for a complimentary copy of the full report!

Below are a few highlights of the 2017 report:

The Medicus Firm is an MGMA© Executive Partner